When I try to edit my prompts, it doesn’t let me do it. It tells me that I need to select the language, but when I open the list of languages, only three are shown. 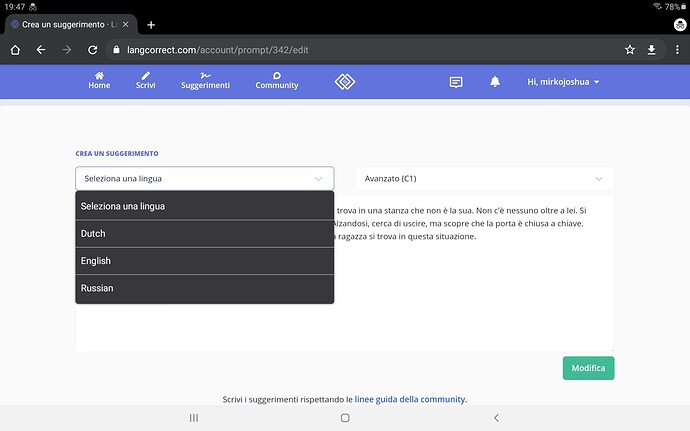 This happens on an Android tablet.
Also, how do I filter prompts by language? There’s a button for it, but when I select the language nothing happens.

I’ll put in a fix to pre-populate that drop-down with the original value. As for the filtering, do you by chance have scripts disabled on your browser? I’m working on v3 designs, and will be able to look in more depth in a few days.

I think I updated my list of stuying languages some months ago (around January or February). What looks odd to me is that not all languages are the ones I’m active in: I’m active in Russian, but I’ve never studied Dutch. I added English, but haven’t posted anything as of yet. In another instance, the menu made me choose between English, Mandarin and Georgian (again, I’ve never studied these languages).

I checked and my scripts are enabled, so I’ve got no idea what’s going on :c

I also want to add, I have no problem creating prompts. This happens only when I edit them.

Got it. Prompts are getting a massive overhaul in v3, and will keep an eye out for this issue. I won’t be releasing a fix for this in v2 since it will be getting replaced soon.